An interview with a Tibetan Monk in Prague 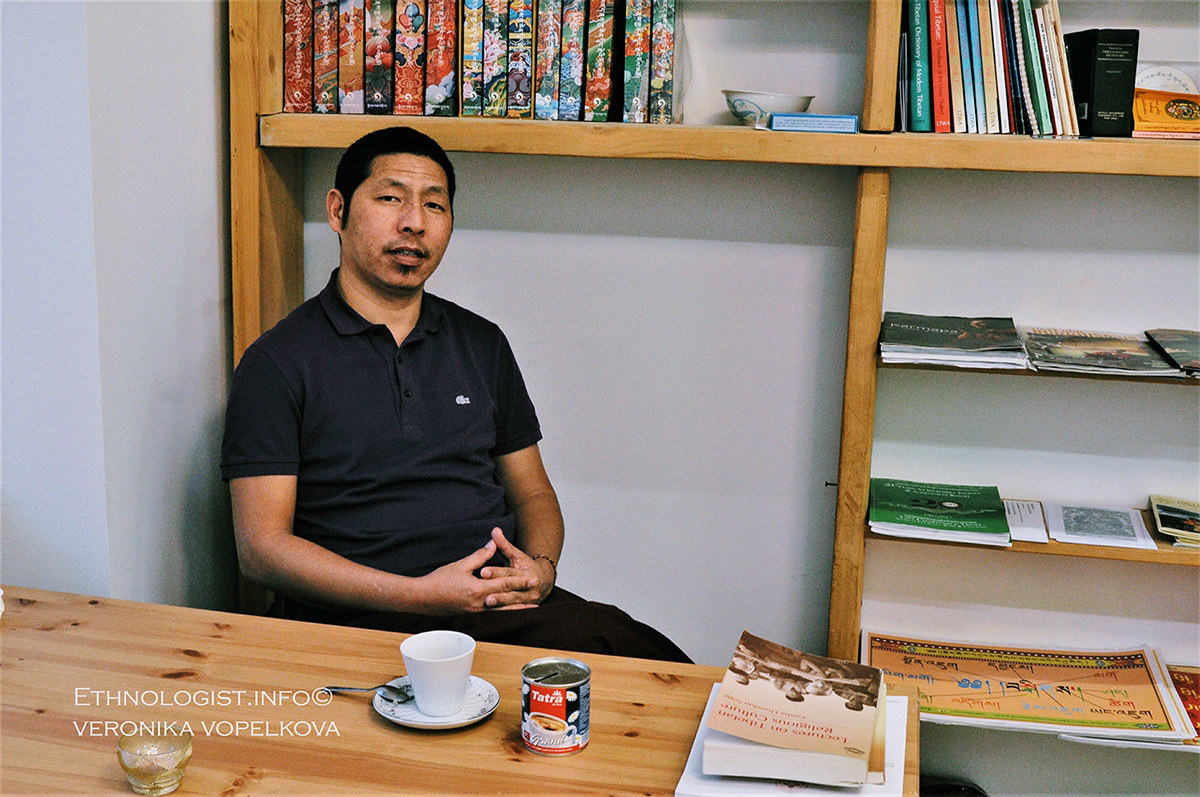 An interview with a Tibetan Monk in Prague:

An insight into Tibetan culture, identity and the realities of life from the personal experience and opinions of a monk living far from home.

Our interview with Tibetan lama Geshe Yeshi Gawa took place in a classroom at the Tibet Open House. This centre, which is located in a courtyard on Vodičkova Street and Školská Street, has the appearance of a spiritual oasis in the midst of Prague’s urban hustle and bustle. There, Yeshi Gawa teaches Tibetan language and gives meditation lessons and lectures dedicated to Tibetan Buddhism and its cultural heritage.

Yeshi Gawa was honoured with the ‘Geshe’ title – equivalent to a Western academic degree – after 20 years of studying at a Tibetan Buddhist school in India. He was asked to write a biography of Tändzin Gjamccho, the current Dalai Lama, and he has participated in a number of conferences across Europe. Subsequent steps have led him to France, New York, Washington, Germany and the Netherlands. For the past two years he has been working in Prague in cooperation with the Linhart Foundation’s project ‘Tibet Open House’.

Q. Between 16 and 18 February 2018, the New Year was celebrated in many Buddhist countries. In Tibetan language it is called Losar. What are the specifics of this tradition in Tibet?

A. First of all, I would like to explain the meaning of this festivity. Lo means year and sar means new. This year (2145) is the Year of the Earth Dog, last year was the Year of the Rooster and next year we will celebrate the Year of the Pig. The date of the festivity is counted from the event of crowning the first Tibetan King, Nyatri Tsenpo.

Usually, the first three days are important. Losar starts two days before the New Year. These days are called the Nyi-Shu-Gu and Lama. Nyi-Shu-Gu means ‘to think of the last days’. In this time the preparations for Losar begin. Traditionally, we clean and decorate our homes and streets during this time. The kitchen has special meaning for Tibetan families and we paint it, as often it is very dark due to the smoke from the open fireplace. We make sure it looks new again. At the end of this day, we share the traditional Tibetan guthuk (thukpa bhatuk). This is a noodle soup with dumplings and each dumpling contains one of nine different fillings including coal, salt, paper or cotton. Each filling has a special meaning which determines the character of the visitors. For example, if you discover cotton, it means that you are warm-hearted. If you find chili, it means you are talkative. If you find coal, it means you are a very cruel and bad person! And so on.

Then we start the prayers and continue with rituals that evict evil spirits, illnesses and misfortunes from our house, from our loved ones and from our acquaintances. There are also altars prepared with many traditional hand-made cookies and gifts. On the first day of Losar we get up very early, dress up in new clothes and invite everyone to the feast. On that day we meet the Lama, Rinpoche. Tibetan families visit monasteries, which are spiritual centres.

Q. Do people celebrate Losar differently all over Tibet?

Q. Do you think that Losar traditions have been transformed by the influence of globalisation, the current political situation in Tibet or simply by the passing of time?

A. Certainly. For example, Tibetan people are better-off now and they do not always have open fireplaces in their homes. So, not all kitchens need to be painted and decorated again. This is particularly the case in the monasteries.

In Tibet, New Year means a new beginning and people are more religious during this time. In the past, the act of sacrifice was one of the most important religious activities. Sacrifices were placed in the skull of a sheep. This custom has its origin in Tibet’s ancient religion, Bon. It has largely disappeared, especially because it does not correspond with the doctrine of Buddhism. The Tibetans later replaced real sheep’s skulls with artificial ones, but even in this form the habit did not continue. Alcohol (wine and beer) was also offered on the altar, as well as flowers. Some changes have come about due to Chinese influence. For example, previously only Tibetan food was served during Losar. Now this is changing and instead of their own traditional dishes, Tibetans prefer Chinese food.

Q. Because is it easier to prepare?

A. No, Chinese cuisine has a great diversity as well as many spices. The taste is great and that, I think, is very enticing. During the New Year celebrations each household invites family members and friends to dinner. They really care about the food. Also, Chinese food looks very delicious and is popular. Therefore, they prefer to choose Chinese recipes.

Q. Now I would like to ask you about Tibetan identity. There are a lot of ethnicities in Tibet. Are these ethnicities different not only in terms of their origins but also their ways of life? Do they all feel Tibetan affiliation and unity?

A. I think that before the Chinese occupation rural people did not know too much about Tibet and did not have much knowledge and awareness of what it means to ‘be Tibetan’. Some of them tried to separate themselves from the sovereignty of the capital, Lhasa. Even though we have had a Tibetan government and soldiers, they did not consider themselves as Tibetans. Unfortunately, everyone has suffered since the Chinese occupation. Moreover, we  share the same language and today all of the Tibetans have the feeling: ‘We are Tibetans.’ We have a different culture from China, but the occupiers remind us that we have the same history.

Q. Are you in touch with your family and friends? How do you contact them?

A. When I was growing up in India communication was very difficult. It was before the breakthrough of the Internet and mobile phones. I had to write letters to my family and if they were lucky they received them after three months. Nowadays it is much easier to communicate – if we talk about general things it is ok. However, if we start talking about politics or other controversial topics, it could be problematic.

Q. What are the Tibetan people doing to preserve their culture and identity?

In Tibet it is quite difficult. In exile we can do everything – there are no restrictions. But as China is trying to suppress Tibetan culture we have little activity there. Tibetan associations supporting Tibetan culture are not allowed, but there are many such organisations outside of Tibet. For example, the monasteries have become spiritual and cultural centres.

The official language in Tibetan schools is Chinese and many students learn it. It was the reason for student protests a few years ago and also why the initiative Lhakar was introduced. Lhakar can be translated as ‘White Wednesday’ and it has been happening in Tibet since 2008 when there were large demonstrations and rebellions. Every Wednesday we speak Tibetan, eat Tibetan food and wear traditional Tibetan clothes.

Q. How can a Tibetan boy grow up to be a Buddhist monk? Why did you leave home with your uncle and travel to India?

A. It was the wish of my parents and my uncle. They wanted me to learn Tibetan culture, language, religion and history. We did not have such high-quality education in Tibet. Moreover, I was looking forward to a new adventure. There are many schools in India where they teach Tibetan religion and culture and more besides. This initiative was launched by the Dalai Lama, as he wanted young Tibetans to be educated and not lose their sense of Tibetan pride.

Q. What is it like to live in the West, far away from the monastic life, surrounded by a completely different culture and mentality?

Sometimes I feel lonely. There are virtually no Tibetans here, in contrast to France, Amsterdam, New York. I expect that only 10 Tibetans or so live in the Czech Republic. So whenever I see a monastery I am very happy. All my friends live in India. My family is in Tibet. I have been here for almost a year and my contract is for two to three years. Even if I am not happy I have to stay here. Then I will consider whether I will stay in the Czech Republic – if there will be more advantages.

Q. What do you think about the Czech people?

A. I like the Czech Republic. It is a safe country without any potential serious dangers such as earthquakes, terrorism or poisonous animals. The people are good and I appreciate the serious interest and support for Tibet. The current Dalai Lama is highly respected in the Czech Republic. But I cannot judge the mentality of the Czechs.

Q. What sources of income are available to Tibetan lama in the Czech Republic? Maybe my notion of Buddhist monks begging is outdated, but in the past monks have depended on the goodwill of laypeople. They asked for alms or were sponsored by specific donors. I suppose that Czechs do not feel they need to improve their karma by giving alms.

A. That is a misconception. The temples have their sources of income today. Many of them own hotels, restaurants, orchards or farms, which provide them with a living. However, donations are still important. I am a teacher of Tibetan language, culture and religion in Prague, so I have a regular salary.

Q. What are your goals with Tibet Open House? Do you have any personal mission?

A. Sure, we have three goals in Tibet Open House. First of all, we want to provide information about the Dalai Lama’s three commitments: 1) maintaining basic human values and ethics leading to inner satisfaction and happiness; 2) promoting religious harmony and knowledge of all the respected doctrines that have a common essence and purpose; and 3) enhancing perceptions of Tibetan culture and identity.

We also make an effort to carry out cultural exchange, which takes the form of lessons and courses. I offer two language classes per a week, three Buddhist lessons, two different sessions of meditation and one prayer.

Finally, our ultimate common goal is to support the education of Tibetan refugee students. Personally, I would like to provide education and establish schools in my village. Furthermore, there is still a lack of high quality medical facilities. I would like to offer my thoughts and my help to the Tibetan country and to the people who live on the Tibetan Plateau.

Author´s note: During this interview Geshe Yeshi Gawa ordered cup of coffee with milk. I was wondered about his vegan life style. He admitted that he is only ´90 percent vegetarian´. After several unsuccessful attempts to completely restrict the consumption of meat (one of the higher aim of Buddhism, not a duty), he eats meat only occasionally, as he said: ´Tibet is not a vegetarian. Many local Tibetan monks breed farmed animals and eat meat. It is due to Tibet’s geographic position where less fertile soil for planting vegetables is. But I think eating meat is not good.´

Veronika Vopelkova graduated in Culturology (Theory of Culture) from the Faculty of Arts of Charles University in Prague. During her master’s studies at the Institute of Ethnology (Charles University), she focused on African studies, especially African cultures, African history and traditional African religions. In 2015, she undertook a one month long field work in the Northwest Province of Cameroon, where she carried out 111 questionnaires with people from Kedjom Keku. Moreover, she interviewed the local authorities and other influential persons. The main focus of her master’s thesis includes important ethnologist phenomenon, for example: witchcraft, faith in the souls of ancestors (associated with the celebration of death) and traditional medicine practices.