Mexico´s Day of the Dead: an Endless Dance of Life and Death

In the West death is generally perceived as the end of life and existence and so it promotes feelings of fear and anxiety. Anything connected to death is taboo and pushed to the edge of society as the antithesis of the modern cult of eternal youth and a comfortable lifestyle. There are, however, other cultural and philosophical discourses, according to which death is only an obstacle between ‘this’ and ‘the other’ world: a transformation in our existence rather than its end. Within this philosophy, the souls of the deceased are invited each year into houses and onto the streets, where altars are surrounded by colourful flowers and lit candles, accompanied by the sounds of dynamic music and dance. A famous example is the colourful Mexican Day of the Dead – Día de Muertos. The Day of the Dead is a time where the dead can come back to life, when their presence is celebrated with joy and a shared sense of generosity. This celebration becomes an endless dance of darkness and light, music and silence, life and death. 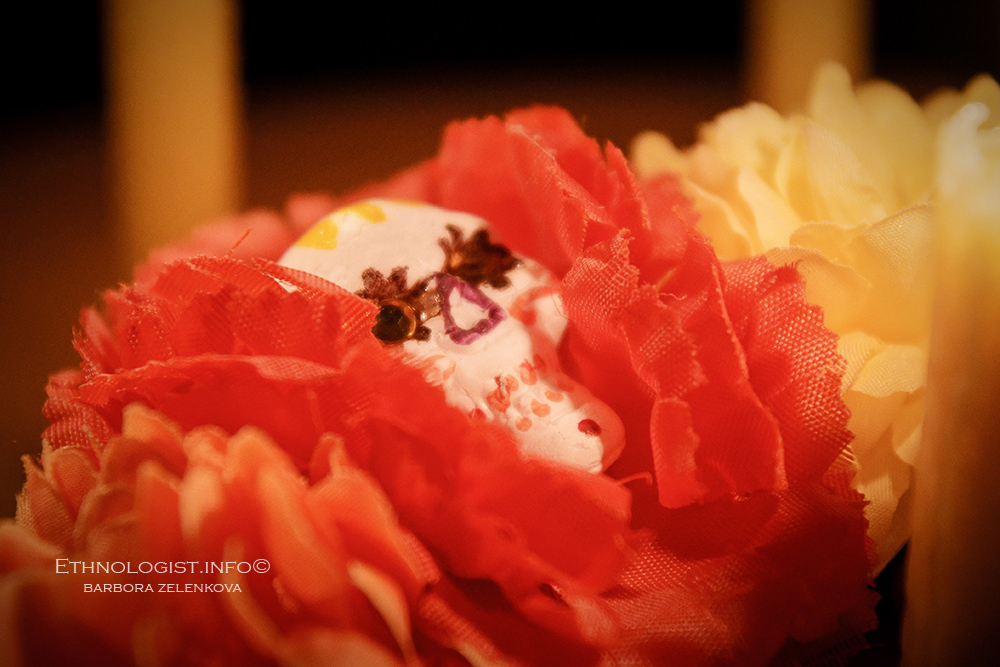 What exactly is the Mexico´s Day of the Dead?

The end of October is increasingly associated with Halloween in Western countries influenced by American culture, but in others where the Church, and especially the Catholic Church, still retains more of an influence, All Saints Day is celebrated, followed by All Souls Day. In Mexico, this remembrance celebration takes a very distinct form. Día de Muertos has combined elements of pre-Hispanic traditions, preserving, for example, the religious ideas of the ancient Aztecs, with later Mesoamerican concepts of life and death and also with Catholic feasts. The Mexican Day of the Dead is thus a unique synthesis of a variety of cultural elements. Every year, the feast starts on 31 October, when the preparations begin to commemorate the memory of the deceased. The following day, 1 November, the Día de los Innocentes is devoted to the souls of children who have passed away. The celebration of death culminates on 2 November, the day of Día de los Muertos, to worship all the dead. Traditionally, the celebrations include ofrendas (gifts) dedicated at altars to the spirits of the dead, as well as visiting graves, street dance and musical performances.

History of the Feast

The ancient Aztecs were influenced by the cosmogonic concept of the earlier Toltec culture,1.The terms Toltec and Toltec culture have recently created considerable controversy in the academic community and there is much speculation among archaeologists, historians and anthropologists about the truth of the ancient Toltecs and their culture. The Mexican anthropologist and historian Miguel León-Portilla argues that the Toltecs are a distinct ethnic group and he, along with other historians, considers the archaeological site of Tula to be the centre of the Toltec civilization. which, like Aztec culture, perceived an endless cycle of time. Therefore, birth was alternated with death and subsequent rebirth. For example, the Aztec symbol for grass, malinalli, shows dense vegetation growing from the jaws of the human skull, which symbolises the endless connection between life and death.2.See BROWN, Betty, A.: Living Traditions in the Mexican Days of the Dead. In: African Arts. University of California, 1983, pp. 79-88. According to Aztec myth, the dead souls entered the first stage of the underworld called Mictlan, a space of nine spheres, through which the souls had to pass and take challenging trials. Interestingly, the Aztecs believed the soul of a dog could help the human spirit to pass through these spheres, which explains why canine remains have been found next to human bones in many Aztec and Mayan burial grounds.3.NEUMANN, Franke, J.: The Dragon and the Dog: Two Symbols of Time in Nahuatl Religion. In: Numen. Brill, 1975, pp. 17-18.

The Aztecs also celebrated death, especially of their rulers, but unlike today’s Mexican celebrations, they made many human sacrifices, including of children. These human sacrifices, of course, did not fit with the Christian faith, and this practice disappeared with the fall of the Aztec civilization. However, paradoxically, during the Spanish conquest and the rule of the Catholic Church, the indigenous peoples were tortured and executed. Over time, the bloodshed of the colonising era has become part of history and more recently the cultures have melded. This particular cultural syncretism gave rise to the unique Mexican feast, which UNESCO recognised on its World Heritage List in 2008.4.See Indigenous festivity dedicated to the dead

Mexico’s Día de Muertos is a colourful festival of feasting and dancing with the souls of deceased loved-ones – it is a much anticipated social event. For many families the start of November is a time of talking and story-telling, not only about death but also about shared memories of ancestors, who are shown great respect. The spirits of the dead are invited to a rich celebration to ‘eat’ and ‘drink’ from a prepared table resplendent with ofrendas spread around the altars where the photographs of the deceased are also placed. During the celebration, people pray for these souls and the candles remain lit, flowers adorn the altars and dishes are refilled.

The celebration is accompanied by a variety of dance, music and theatre performances, the streets are decorated with paper garlands, and the markets sell ‘sugar skulls’, which may be made from sugar, but also plastic or wood. These sugar skulls are iconic masks that traditionally represent the individual soul of a deceased person. The style of make-up featured on the sugar skull is becoming increasingly popular. Often it appears as part of Halloween costumes – to the disapproval of many Mexicans, who believe this overshadows the great metaphysical concept at the heart of the Day of the Dead, and the ability to connect with the souls of their ancestors. 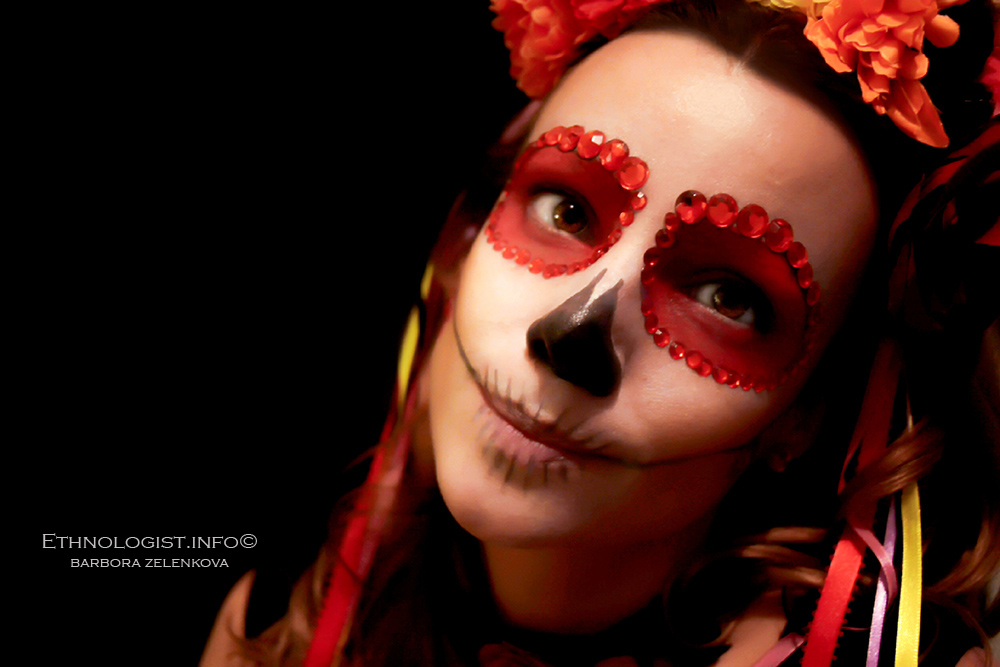 Contemporary celebration of death as a Mexican cultural identity

The Mexicans consider the Día de Muertos to integral to their cultural identity, distinguishing it, for example, from the growing popularity of Halloween. The American anthropologist Stanley Brandes has noted that tourism and international relations have greatly encouraged the development of this feast, which is today a symbol of Mexican national pride.

Any misappropriation of the feast is strongly criticised as an offensive attack on Mexican national pride, as we have already shown with the case of the Halloween makeup. Another example is the 2005 movie Spectre: the film sees James Bond in Mexico City during the Día de Muertos celebrations and for some Mexicans it was an inappropriate representation of the feast. In summary, the Mexicans’ remembrance of their dead is certainly a colourful and joyful celebration, but this endless dance of life and death also demands respect as a dignified remembrance of the deceased.

BROWN, Betty, A.: Living Traditions in the Mexican Days of the Dead. In: African Arts. University of California, 1983.

Indigenous festivity dedicated to the dead

NEUMANN, Franke, J.: The Dragon and the Dog: Two Symbols of Time in Nahuatl Religion. In: Numen. Brill, 1975.

MA et BA Barbora Zelenkova (Sajmovicova) was born in 1985 in Prague. She graduated in Middle Eastern Studies (Near Eastern Studies) from the University of West Bohemia in Pilsen in 2013 and also in Ethnology from the Charles University in Prague in 2015. During her studies in Pilsen she focused on Somalia and Somali people and in Prague on Czech Orientalist and Arabist professor Alois Musil. Since 2014 she has been living in London, where she founded the website The Ethnologist, where she is editor in chief. She is also involved in translating (English/Czech, Czech/English). During her university studies visited Middle East, for example Egypt, Israel, Palestine and Jordan.